Home > The VHL TCIM Americas: a collective dream and effo... 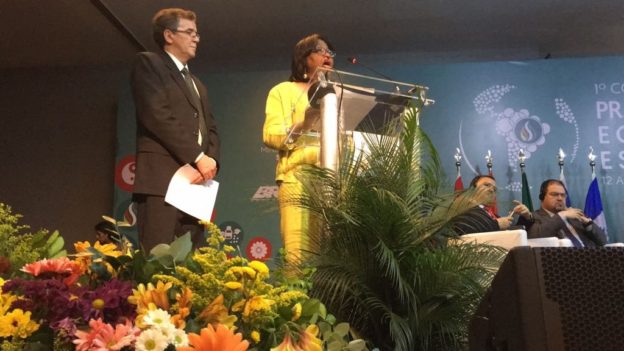 The Virtual Health Library on Traditional, Complementary, and Integrative Medicine (VHL TCIM) for the Americas was launched on March 12th by the PAHO/WHO Director, Dr. Carissa Etienne, and the Director of BIREME/PAHO/WHO, Dr. Diego González, during the opening ceremony of the 1st International Congress of Integrative and Complementary Medicine and Public Health, organized by the Brazilian Health Ministry, in Rio de Janeiro.

Dr. Carissa Etienne highlighted the importance of this initiative and praised the collective effort, led by BIREME. She expressed her hope of seeing the VHL TCIM grow and serve all the stakeholders in the Region and beyond. In her speech, Dr. Etienne referred to the need to (…) “recognize that there is debate in several fronts about the pertinence of integrating and articulating these approaches into health systems and services,” and to the need to have “meaningful conversations and debates [for which] relevant information is key. ” Dr. Etienne cited a survey conducted by WHO during the development of the WHO Traditional Medicine Strategy which showed that “the number one constraint Member States cited for the development of policies and regulations on traditional and complementary medicine was the lack of research data”; and clarified that although it is true that it is necessary to have more research data, “most often a major roadblock is access to already existing information” because often, research results end up in places where people who need it the most cannot find it.

The VHL TCIM initiative seeks to facilitate access to scientific and technical information on the subject, as well as to encourage collaboration and the strengthening of research capacities. The VHL TCIM, in line with the WHO Traditional Medicine Strategy 2014-2013, seeks to broaden the evidence base, providing a collaborative platform where information can be easily accessed in an organized and friendly manner.

During the launch, Dr. Etienne acknowledged that “often, in our societies, it is challenging to bring actors from different sectors together, to work collaboratively”, for which she commended the example of the VHL TCIM initiative, since it has managed to bring together policy makers, regulatory bodies, academia, professional associations, healthcare providers, indigenous and afro descendants’ organizations “to collaboratively develop a virtual space that would allow us to have a better understanding of the traditional and complementary medicine landscape in our Region.” During the launch, Dr. Diego González recalled that “the initiative of the VHL in TCIM is a response to the expressed need of the countries of the Region to have collaborative spaces and information on TCIM that is reliable, accessible, and that support decision making.” Dr. González praised the collaborative work of the Regional Network on TCIM for the construction of the VHL, and the importance its continuity over time “to keep this space alive and updated.”  Dr. González also thanked the support of several PAHO/WHO units for this initiative, including the Cultural Diversity Program of the Office of Equity, Gender and Cultural Diversity, the Health Services and Access Unit, and the PAHO/WHO representation in Nicaragua, which under the leadership of its Representative, Dr. Socorro Gross, sowed the first seed of this project. He also thanked the project “Integrated Health Systems in Latin America and the Caribbean,” funded by the Government of Canada, for financial support, and the Brazilian Ministry of Health for supporting the creation of the Brazilian Consortium of Researchers in Integrative Health, an initiative linked to the VHL TCIM Americas.

At the end of his speech, Dr. Diego González invited everyone to access, experience and use the VHL TCIM Americas as a tool for the empowerment of professionals who engage in policy development, management, training, and regulation of integrative practices for health.

One thought on “The VHL TCIM Americas: a collective dream and effort that became reality”