Home > Promotion of the VHL Traditional, Complementary an... 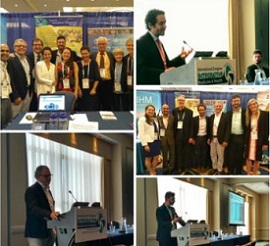 The VHL TCIM Americas was launched on March 12 by the Director of PAHO/WHO and the Director of BIREME, within the framework of the 1stInternational Congress of Integrative, Complementary and Public Health, organized by the Ministry of Health of Brazil, in Rio de Janeiro. Recently, this VHL was presented and promoted by BIREME/PAHO/WHO in two important events held in the United States, thanks to the initiative coordinated by the Health Services and Access Unit, and the Office of Equity, Gender and Cultural Diversity of PAHO/WHO.

Dr. Anna Coates, head of the Office of Equity, Gender and Cultural Diversity of PAHO/WHO, who made the opening speech, remarked that “the strengthening of efforts to recognize ancestral knowledge and traditional and complementary medicine is key to combating ethnic inequities and thus being able to move towards Universal Health. Referring to the VHL TCIM Americas, she noted that “improving access to knowledge and experience in traditional medicine is part of these long-awaited efforts to move towards inclusion and equity”. This is why Traditional and Complementary Medicine was included as a central component of the intercultural approach in the PAHO/WHO Ethnicity and Health Policy, that seeks to guarantee the inclusion of indigenous peoples, afro-descendants, Romani people and members of other ethnic groups, and urges Member Stated to consider the connection between ethnicity and health, and to promote an intercultural approach for advancing towards Universal Health. Likewise, the Universal Health Strategy of PAHO recognized that challenges such as respect for traditional medicine affect the quality of health care.

The VHL TCIM Americas was developed with the aim of contributing to this purpose. Dr. Diego González, Director of BIREME/PAHO/WHO and Verônica Abdala, Manager of Products and Information Services of BIREME presented VHL Americas at the event. This VHL is a virtual space that draws on the work of the TCIM Network for the Americas, which seeks to expand and facilitate access to knowledge and to increase and improve the quality of research in the area, fundamental axes for advancing towards Universal Health and the inclusion of all peoples. Three other presentations completed the agenda of the Webinar: “The role of integrative and complementary practices in Primary Health Care in Brazil”, by Daniel Miele Amado, National Coordinator of Integrative and Complementary Health Practices, Ministry of Health of Brazil; “The importance of Traditional Medicine for ethnic diversity in the Americas”, by Dr. Vivian Camacho Hinojosa, member of the High Level Commission 40 years of Alma-Ata, PAHO; and “Competences in integrative health for professionals in Primary Health Care”, by Dr. Benjamin Kliegler, National Director of the Comprehensive Health Coordination Center, Office of Patient-Centered Care and Cultural Transformation of the US Veterans’ Health Administration. The moderator for the Webinar was Dr. Hernán Luque, Advisor, PAHO/WHO Health Services and Access Unit.

The second event was the International Congress on Integrative Medicine & Health, held in Baltimore, from May 8 to 11, and organized by the Academic Consortium of Medicine and Integrative Health of the United States. The Congress brought together approximately one thousand participants from 30 countries, mainly researchers and professionals of diverse profiles interested in research in this area.

The mandates, conceptual frameworks and initiatives of PAHO/WHO on the subject, including the VHL TCIM, were presented in a Panel of the Congress by Daniel Gallego, consultant of the Health Services and Access Unit (HSS/HS/PAHO). Ricardo Ghelman, President of the Brazilian Academic Consortium on Integrative Medicine and Daniel Miele Amado, from the Ministry of Health of Brazil, both strategic partners of the VHL TCIM, presented their respective institutional initiatives and their articulation with the VHL TCIM. Likewise, thanks to the support of HSS/HS/PAHO, the VHL TCIM was promoted and demonstrated in a stand in the exhibition hall throughout the event, where Verônica Abdala (BIREME/PAHO/WHO) and Natalia Sofía Aldana (Consultant of the VHL TCIM project) had the opportunity to explore new collaborations.

Both events confirmed the importance of the VHL TCIM Americas and of the work that is being developed with the collaboration of BIREME/PAHO/WHO and the support of the technical units of PAHO/WHO. Participants of the events highlighted the results of the collaborative work, articulated in the short period of time that the project has been underway.

According to Verônica Abdala, Manager of Services and Information Sources of BIREME/PAHO/WHO, “we have come a long way, but there is still a lot to do. The VHL TCIM has ambitious plans for expansion and development of its various sections and services, including the promotion of the quality of research on the subject, especially in Latin America and the Caribbean, as well as the development of new content such as information for self-care and synthesis of evidence in TCIM. These are ambitious objectives, which require financial resources, expansion of collaboration and strengthening of the Network”.